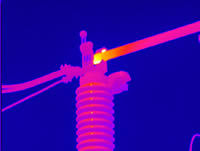 Thermographers have long used temperature differentials or Delta T measurements as a means of prioritizing electrical and mechanical exceptions. Typically, Delta T values are calculated by comparing the temperature of an exception to similar components under similar load or to ambient air temperature. Although they work well in many circumstances, Delta T readings are not applicable for components that do not qualitatively manifest themselves as an exception.

An alternative to Delta T calculations is a formula known as Tmax Corrected. This formula is based upon an IEEE formula and calculates pass/fail criteria based upon several factors including equipment type, ambient air temperature, and circuit load.

Although requiring a little more time to apply than Delta T calculations, Tmax Corrected allows one to determine if a component of interest is running within specification for any load or ambient temperature. Tmax Corrected is especially useful for equipment that is not manifesting itself as an exception. Tmax Corrected can be an invaluable tool for those who perform infrared inspections as part of commissioning studies or use thermography for acceptance testing of new installations, repairs, or retrofits.