Excess heating is often a sure sign of defective electrical equipment; however, the absence of heat can also be a sign of component failure. In this Tip, we demonstrate how thermal imaging may be used to detect defective Arc Fault Circuit Interrupters.

An Arc Fault Circuit Interrupter (AFCI) is an advanced type of electrical circuit breaker that automatically opens a circuit when it detects a dangerous electrical arc on the circuit it protects. Designed to help prevent electrical fires, an AFCI can sense between electrical arcs caused by defective equipment versus those associated with the normal operation of devices such as light switches.

In order to monitor for dangerous electrical arcing on a circuit, AFCI devices have electronic circuitry built into them. This circuitry can cause the body of the AFCI to run several degrees warmer than ambient temperature. Depending upon the settings of your thermal imager, these devices may show a marked contrast to their surroundings. 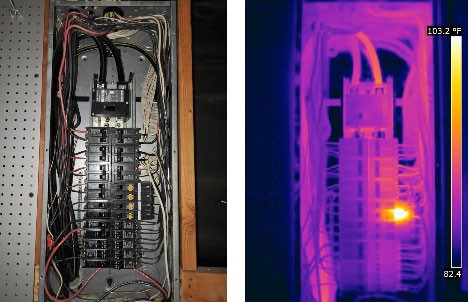 Thermogram shows three out of four AFCI devices operating at ambient temperature. These devices had failed and were no longer protecting against arc faults. Images courtesy Houston Thermal Inspections and Infrared Imaging.

When thermographically inspecting AFCI devices, be sure to inspect the line and load side connections at the AFCI device as well as the neutral bus bar connection for the subject breaker. Should you find an AFCI device that is operating close to ambient temperature, it is likely that the internal circuitry has failed making the device incapable of protecting against arc faults. Such devices should be further tested and replaced if they are found to be defective.