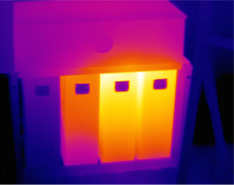 Capacitors are devices commonly found in AC electrical distribution systems where power factor correction is required. Like any electrical component, capacitors need to be regularly checked for proper operation. Infrared thermography can be used to rapidly inspect capacitors from a safe, remote distance.

Capacitors are wound devices that are electrically connected between potential and ground. Capacitors used for power factor correction are generally encased in painted, rectangular steel canisters and often have two equal sized bushings for electrical connections. In a three phase circuit, there may be several capacitors connected to each phase.

The most common failures of capacitors are loose/deteriorated bushing connections, open circuits due to internal winding failure, and open supply circuits. When inspecting capacitors, be sure to:

Any thermal anomalies detected should be investigated and corrected as soon as possible. Capacitors operating at ambient temperature should be corrected immediately as imbalanced capacitance can be more detrimental than having no capacitors at all.